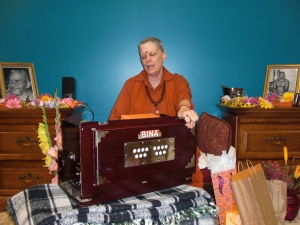 Guru Purnima, the full moon of the Guru, is celebrated as the day the world got its first Guru (Shiva). This was the day that people first came to know that through the Guru, through Grace, they can be Self-Realized.

This past Sunday, our meditation hall at Downingtown Yoga Meditation Center was filled to the brim with yogis bearing flowers, gifts and hearts full of Divine Love; wanting nothing more than to honor their Guru, Swamiji, while she honored her Guru, Baba Muktananda. Self honoring Self.

Swamiji offered illuminating commentary on Shiva Sutra 2.6, “Gururupaaya.h” — the Guru is both the path and the goal.  “The Guru has done what you are doing,” walked the path you are walking.  The Guru is “the embodied reality who shows your future to you… the goal.”  She went on to promise, “My Guru freed me, so that I could free you.

With these words lingering in the air, Swamiji led the crowd in chant and deep meditation, followed by an invitation to greet her personally.

Then slowly, ever so gently, sweetly, one by one, the yogis in the room approached their Sadguru, bowed and offered their gift, their gratitude. In turn, Swamiji honored and celebrated everyone who came forward by offering a flower and a soft “Om namah Shivaya.”  Self honoring Self.  Profound silence filled the room, palpable and timeless.  Grace-filled hearts were opened wide.

It’s offical! The new signs for Downingtown Yoga Meditation Center are up! While we have held several satsangs, Shri Guru Gitas, yoga classes and a Shaktipat retreat since moving to the space in January, we now have “street presence.”

The studio is well-positioned; the main stoplight in the middle of town is very close, so cars stop right in front of our main window while the light’s red. In fact, yesterday, I caught one stopped driver hanging out her window reading our new sign and mouthing the name of the studio. She paused on “meditation” and eagerly nodded her head to herself. She then glanced in the main window and saw me smiling at her. She instantly broke into a huge grin and peals of laughter. We both did! Still beaming, she raised her arms wide as if to offer her enthusiasm, brought them together into anjali mudra and bowed. I returned the gesture. The light turned green, and she drove away waving her arm, joyful and ecstatic.

I’m looking forward to meeting her at satsang!

And if you haven’t had a chance to make it to Downingtown Yoga Meditation Center, or Kashi, as we affectionately call it, you can virtually tour it below: 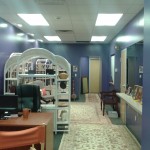 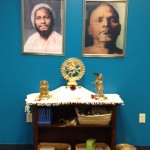 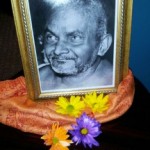 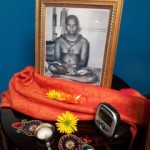